Convergence: A Panorama of Photography’s French Connections in India 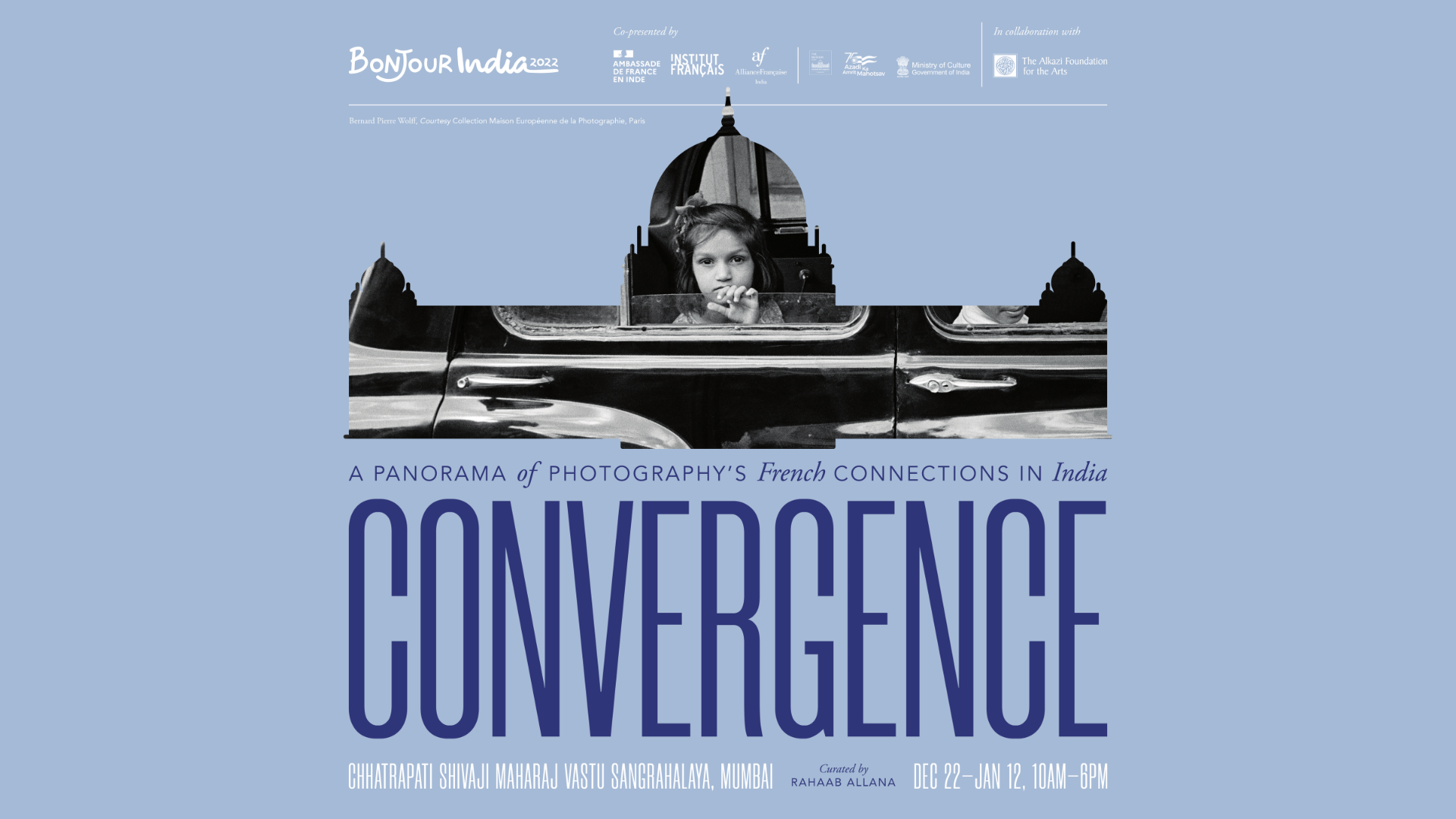 Organised in the framework of the fourth edition of Bonjour India, a pan India festival for the arts, the 75th anniversary of Independence and the 195th anniversary of the birth of photography – the exhibition titled Convergence: A Panorama of Photography’s French Connections in India will be on view at the Chhatrapati Shivaji Maharaj Vastu Sangrahalaya (CSMVS) in Mumbai, from 23nd December 2022 to 12th January 2023, to present works by prominent French practitioners, signposting some of the significant photo-documentary and other creative practices that developed in India over the last 150 years.

The first manifestation of a 6-cities outdoor exhibition tour with in-public focus, will showcase re-prints of rare collections from renowned French museums including the National Museum for Asiatic Arts (Guimet), the Quai Branly Museum (Paris), the Nicéphore Niépce Museum (Chalon), The Maison Européenne de la Photographie (The European Centre for Photography, Paris) and the Goupil Museum (Bordeaux) for the very first time in India alongside select contributions from important early Indian practitioners from the Alkazi Collection of Photography, New Delhi.

Produced by intrepid travellers, writers, journalists, photographers and artists, the exhibits span the colonial, modern and postcolonial periods of subcontinental history from the mid-nineteenth-century to the mid-1970s. The exhibition will feature works of notable French photographers over broad spans of time, such as Louis-Théophile Marie Rousselet, a French traveller in India during the 1860s who met India’s first photographer king, Sawai Ram Singh II in Jaipur, Marc Riboud a celebrated French photojournalist who worked for Paris-based Magnum Photos from 1953-78 and travelled all around Asia in the 50s along with the works of many other modern European masters such as Denis Brihat, Paul Almasy, Edward Miller and Bernard Pierre Wolff among others.

On the occasion of the centenary of CSMVS in 2022-23, we are excited to now present the exhibition Convergence: A Panorama of Photography’s French Connections in India in the scenic vicinity of the over 100 years old African native Baobab tree in the museum, a symbol of CSMVS’ spirit of partnership and diversity. Presented through a modular display, the exhibition showcases the intercultural narrative between France and India from the 19th century until the 1990’s.

Highlights of the exhibition

France and India enjoy a substantive partnership at the core of which lie its people to-people relations, nurtured for decades through collaborations and exchanges. One of its manifestations is the regular rendezvous between our two countries, Bonjour India. This artistic, cultural, educational and social initiative is an Indo-French moment put together by the French cooperation network in India mainly comprising of the Embassy of France and its cultural service, Institut Français en Inde, the Alliance Française network and the French Consulates.

Rahaab Allana is Curator, Alkazi Foundation for the Arts; Fellow of the Royal Asiatic Society (London), and is currently on the advisory board for art and culture of Asia Society (India). Rahaab is the Founding Editor of PIX (enterpix.in); Founder of the ASAP/art app (asapart.in); and Guest Editor of Aperture Magazine’s 2021 summer issue on lens-based culture related to Delhi.

A brief about the Museums/Collections

Created in 1991 by the Town of Bordeaux, the Goupil Museum is dedicated to the image, its techniques and its uses in the 19th century. It contains the collections of the House of Goupil, a dynasty of art publishers and international gallery owners based in Paris who were active from 1827 to 1920.

Located on the banks of the River Seine, at the foot of the Eiffel Tower, the musée du quai Branly – Jacques Chirac aims to promote the Arts and Civilizations of Africa, Asia, Oceania and the Americas, at the crossroads of multiple cultural, religious and historical influences. Comprising of 300,000 works, the collection housed at the musée du quai Branly – Jacques Chirac is extremely diverse, both in terms of its regions and its contents (photographs, textiles, sculptures, masks, etc.). As a space for scientific and artistic dialogue, the museum offers a cultural program of exhibits, performances, lectures, workshops and screenings.

Presenting 5,000 years of Asian art, the Musée Guimet is the largest European museum devoted to Asian art. Its collections are of unparalleled richness and diversity outside of Asia. From the Buddhas of Afghanistan to the Zen monks of Japan, from Indian fabrics to Samurai armour, and from Khmer treasures to Chinese fine art, the Musée Guimet presents all the civilizations of the Asian continent.

The association Les amis de Marc Riboud was created in 2002 in order to expand the public’s awareness of the photographs by Marc Riboud. It relies on its members to encourage exhibitions, books, films and all projects that could help reach this goal. After Marc Riboud’s archives have been donated to the National Asian Arts Museum – Guimet in Paris, the association is hosted there to prepare exhibitions, books and all projects keeping his legacy alive.

Located in Chalon-sur-Saône, the aim of the musée Nicéphore Niépce is to explain the basics of photography from its invention by Niépce up to today’s digital imagery. Its collections bring together almost three million photographs and objects that provide the possibility of a constantly renewed experience visit after visit. The use of interactive terminals and increasingly sophisticated technology provides a deeper understanding of the photographic world.

The museum is planned as an initiation to the broad principles of photography. Professional prints are displayed side by side with amateur efforts. The illustrated press has an important place as an essential support to the worldwide spread of the medium.

Since opening in 1996, the MEP remains the primary French institution dedicated to photography in all its forms. Their exhibition programme includes both internationally recognised and emerging photographers and filmmakers, highlighting the diversity of artistic approaches to contemporary lens-based practices. Including a world-class collection of photographic prints and artists films from the post-war period and one of the largest specialised research libraries in Europe, the MEP is without equal in Paris.

The Alkazi Collection of Photography

The Alkazi Collection of Photography (ACP) is an archive consisting of an array of photographic material primarily shot between 1850 and 1950.

The core of the collection comprises works in the form of photographic albums, single prints, paper negatives and glass-plate negatives, painted photographs and photo-postcards from South and Southeast Asia. These vintage prints illustrate the progression of socio-political life in the Indian subcontinent through the interdisciplinary fields of archaeology, architectural history, anthropology, landscape, topography, military studies, and Princely India.

Note on the organisers

Embassy of France / The French Institute in India

The French Institute in India (IFI) is the cultural, scientific and educational service of the Embassy of France in India which facilitates academic and scientific exchange and promotes French language and artistic and cultural partnerships. The larger French cooperation network in India includes the Embassy of France in India (New Delhi), the Consulates of France in Mumbai, Bangalore, Chennai & Kolkata, the Alliance Françaises (French language and cultural centres) in over 20 Indian cities, the Campus France offices (agency for French higher education) in 12 cities, research centres in New Delhi and Pondicherry and French schools in New Delhi, Mumbai, Pondicherry and Chennai.

The Institut Français is a public institution responsible for French cultural actions abroad. Its initiatives cover various artistic fields, intellectual exchanges, cultural and social innovation, and linguistic cooperation. Throughout the world, it promotes the French language, as well as the mobility of artworks, artists and ideas, and thus works to foster cultural understanding.

The Institut Français, under the aegis of the French Ministry for Europe and Foreign Affairs and the Ministry of Culture, actively contributes to France’s soft diplomacy. Its projects and programs take local contexts into account and can be successfully implemented thanks to the vast network of the French Embassies’ cultural services, as well as the many Instituts Français and Alliances Françaises present across five continents.

The 14 Alliance Française centres across India are part of a worldwide network of associations founded more than 135 years ago, established in 133 countries and welcoming nearly 500,000 learners every year. Enrolling at an Alliance Française centre in India is an opportunity to learn the French language, discover France and explore the unique character, diversity, history, heritage and gastronomy of the country. Quality courses, a warm welcome, professionalism, innovative methods, cultural programmes, a friendly atmosphere – everything is in place to ensure that French learning becomes an unforgettable experience.

In these 100 years, CSMVS has fulfilled its aim to create awareness and sensitivity towards our heritage through its acquisitions, collection research, and a visitor-friendly experience for the purposes of education, study, and enjoyment. Particularly, in the last decade, the Museum has been transformed into a world-class visitor space. Today, it is one of the most sought-after institutions known for best museum practices, international collaborations, and trend-setting projects. It welcomes over a million visitors every year who experience a sense of joy, pride, and understanding of human achievement when they stroll through the galleries, special exhibitions, and the beautiful heritage garden.

Note on the institutional partner

The Alkazi Foundation for the Arts (AFA) is a Registered Charitable Trust based in New Delhi, India since 2006. Over the years, AFA has been committed to sharing research on the arts with a focus on photography and theatre.  Through a series of scholarly publications, exhibitions, seminars, conferences, workshops, blogs and archive visits, AFA has focused extensively on the interlinked subjects of the ‘metropole’ and the ‘colony’ via anthropology, social history as well as art history, thereby exploring cultural histories of South Asia in the post-Independence period. Visit us on alkazifoundation.org

Founded by Abhineet Singh and Emilia Bergmans in February 2011, the Brewhouse is a creative/advertising agency based in New Delhi that attempts to find new ways for advertising in India. They believe that marketing shouldn’t be an excuse to say things to people but rather a chance to do things for them.