Aparna Bhogal
Sense of humour of the Sanskrit Language

We Indians are proud of our Sanskrit language, a part of our rich cultural heritage since time immemorial. Many of our languages are derived from the Girvanabharati. It is one of the ancient languages and is appropriately praised as devabhasha (the language of the gods). It is a language of knowledge, wisdom. It encompasses knowledge of various fields’ philosophy, science, literature, art and much more! 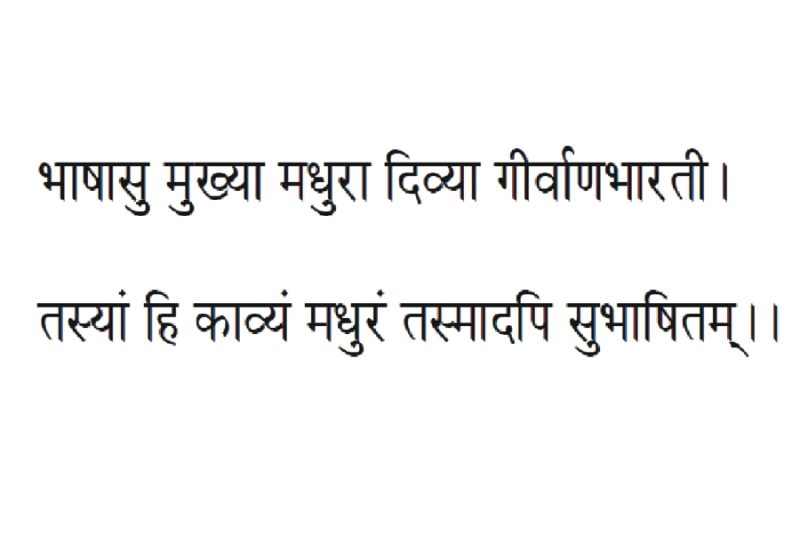 Of all languages Sanskrit is the foremost, charming and divine. In her (Sanskrit language), poetry is sweeter and in that also subhashitas (are the sweetest).

Subhashitas (well spoken or well-expressed sayings) are epigrammatic poems or couplets that express an idea in a clever and funny way. These small verses are full of witty worldly wisdom. They are paripurna (complete in themselves) and don’t need the whole composition for one to understand their meaning. Like maxims, they preach the art of living, morality, dos and don’ts in the society. Many subhashitas are really ingenious in their expressions and they reveal the sound sense of humour of their creators — the subhashtikara. I hope this random assortment of roughly translated verses is able to help understand the talents of the gifted poets’ known or unknown to history. 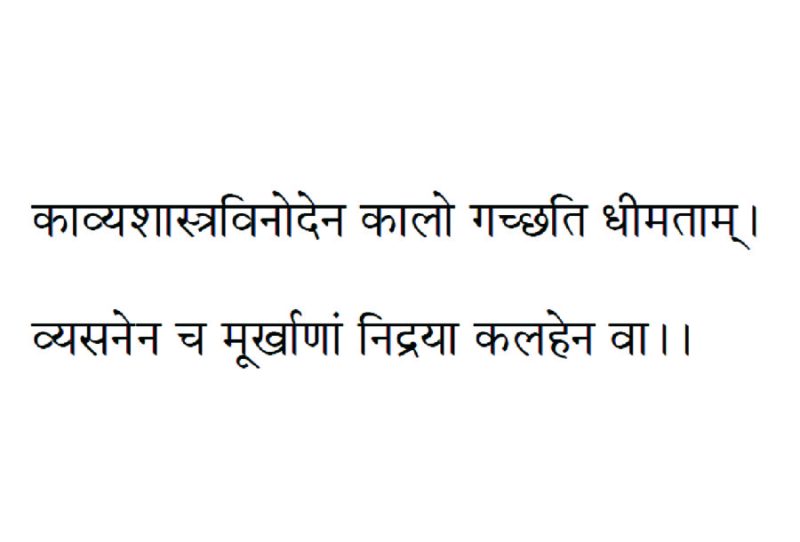 Wise people spend their leisure time in poetry, science and humour while the idiots spend their spare time in sleeping, addictions and quarrels. 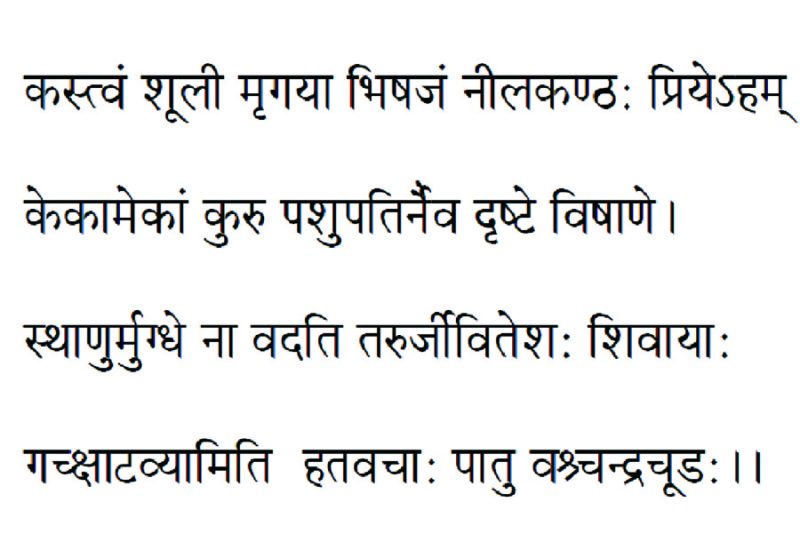 Parvati: Who are you?

Shiva: Shuli (one who holds shula or a trident).

Parvati: (I have) not seen animals (Why have you come here as there are no animals?).

Shiva: (I am) Sthanu (one who stays at one place).

Shiva: This is Shiva’s (Parvati’s) prana (life). (If you are husband of Shrugali or female fox (also Shiva) go to the forest.

Thus, left tongue-tied Lord Chandrachuda (Shiva) be yours (be pleased with you).

Pashupati means lord of animals. It is also one of the names of Shiva. Nilakantha is a one with blue throat. Do you remember the story of churning of the ocean? Shiva drank ‘Halahala’ to save the world and his throat turned blue. Nilakantha is another word for Mayura or peacock.

Sthanu is one of the names of Shiva. The word also stands for a tree.

Shiva is Parvati as the wife of Shiva. This is also a word for Shrugali or female fox.

Another poet wonders about the status of Shiva since He is often found knocking the door of His own house till His ‘grihadevata’ lets him in. The poet wonders why the lord of the gods is begging for alms? He is of high position and his kiths and kins are also very influential! 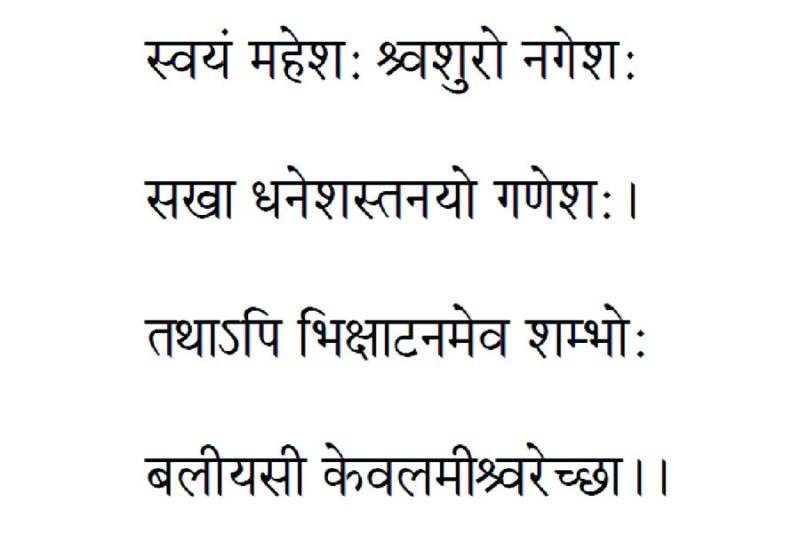 He himself is the lord of the gods, his father-in-law is the lord of the mountains (lord of treasures, minerals, precious stones), His friend is Kubera (lord of wealth), his son is chief of the Ganas (Ganesha) but Shambhu is wandering about for alms (for a living). The will of the god (destiny) is indeed powerful!

The idiom ‘God’s will’ is usually used to suggest destiny in an unforeseen event.

Another poet is grief-stricken when he sees Shankha’s (a conch shell) pathetic condition: 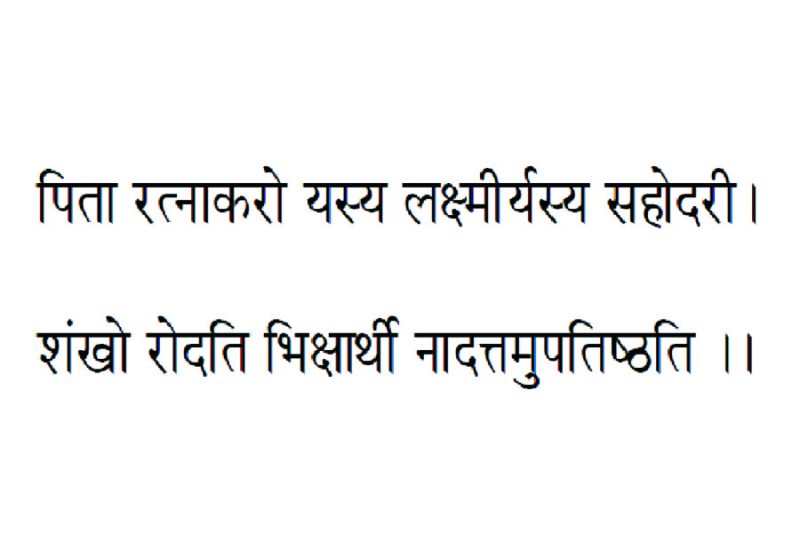 Shankha whose father is Ratnakara (ocean — a reservoir of precious gems) and sister is Lakshmi (the goddess of wealth), is (living as a) beggar weeping (making howling sounds) for alms, and upon those who haven’t given him alms.

There is a reference to mendicants who blow conch shells while begging for alms.

The tribe of ‘fathers-in-law’ gives ample scope for making fun. One poet doesn’t even spare the gods. 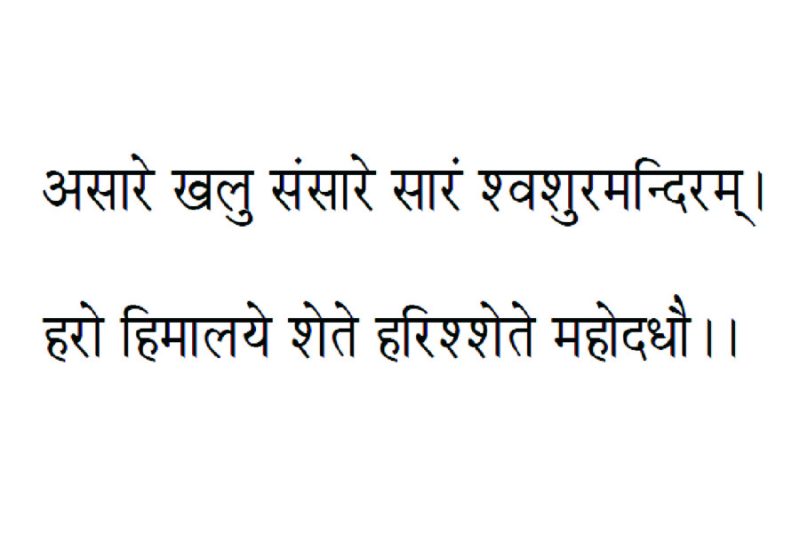 The whole world is indeed meaningless, devoid of fun. Only the house of my father-in-law is a proper (dwelling place). Hara sleeps on the Himalaya (Parvati is the daughter of the mountain Himalaya) while Hari sleeps in the Great Ocean (Lakshmi originated from the ocean).

Another poet doesn’t agree with the former. Possibly unable to get rid of bedbugs, he speculates: 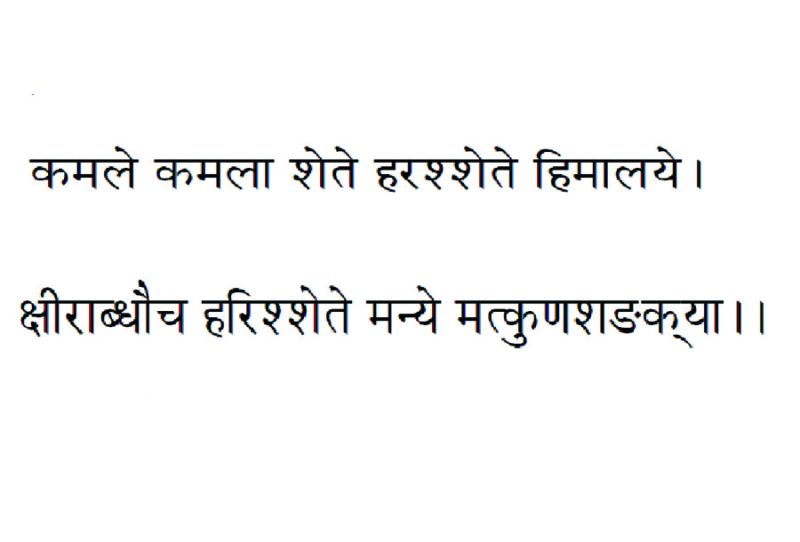 Lakshmi rests in the lotus, Shiva sleeps on the mountain Himalaya, and Vishnu sleeps in the Milky Ocean perhaps because of bedbugs!

It seems iconography inspires them a lot. One genius-poet, upon seeing the image of Saraswati, wonders: 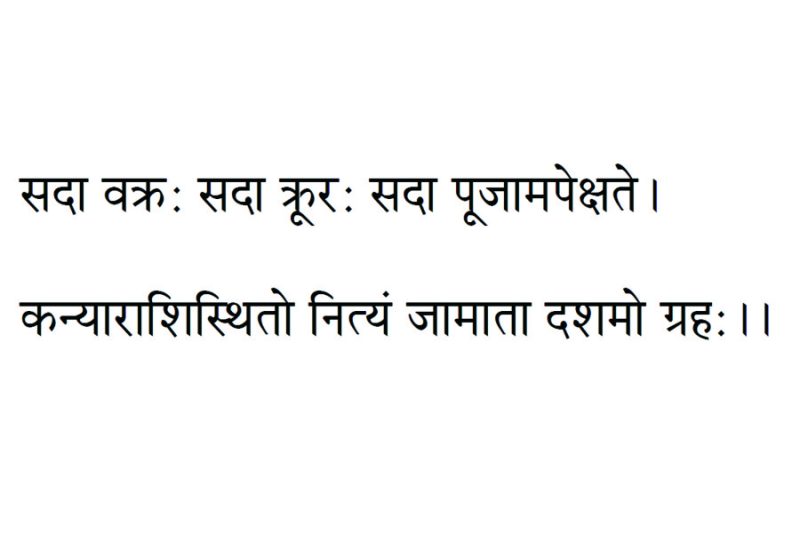 Being unable to cross the Ocean of Music as scared of drowning, (to save herself) Saraswati carries tumbi (two hollow gourds) on her bosom. Tumbi is a reference to Saraswati’s lute, with two hollow gourds. ‘Tumbi’ also implies hollow gourds used by people to stay afloat in water and prevent drowning. In older texts one found plenty of mentions of people who suffered at the hands of their sons-in-law. One of the remarkable verses condemns such sons-in-law in the following words: 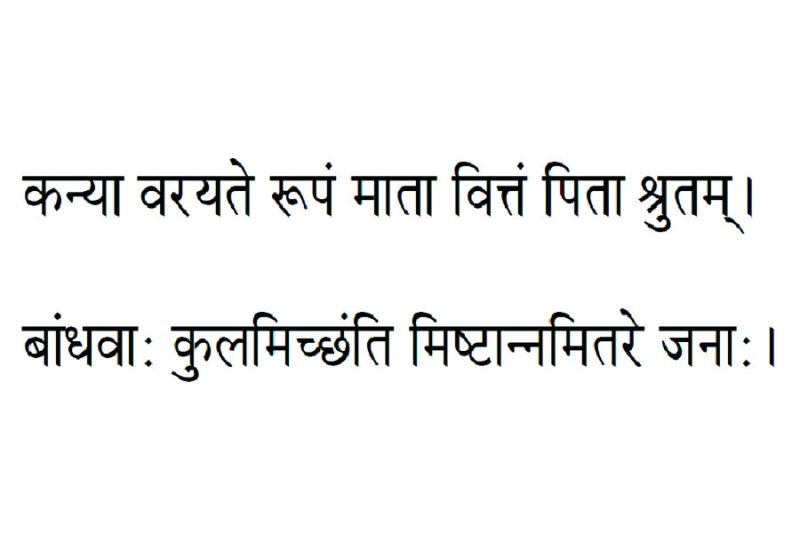 Always hostile, always vicious, always in want of adoration, Son-in-law is the tenth planet which always stays in Kanya rashi. It is believed that a man suffers due to the movement of the planets in and around his zodiac sign according to his birth chart. The word ‘Kanya’ stands for daughter as well as zodiac sign ‘virgo’. A pun is intended here. The poet has introduced the additional tenth planet (apart from the nine planets known then) ‘son-in-law’ who is always a troublemaker. 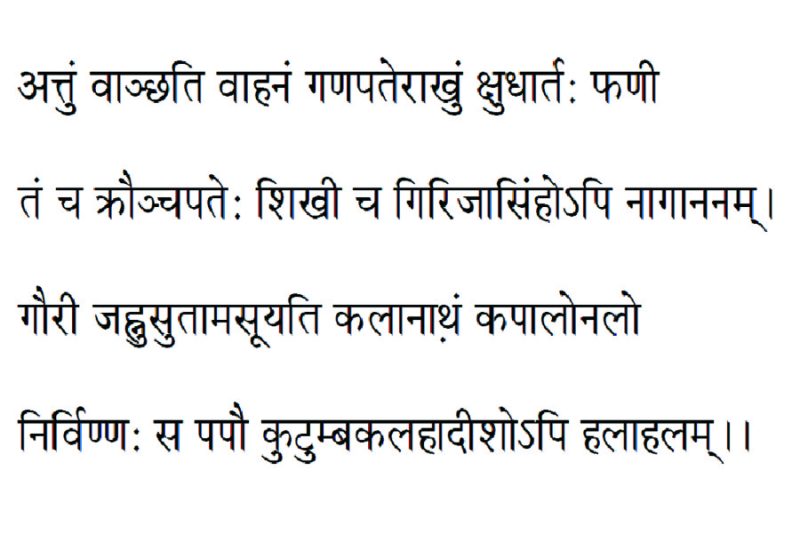 The bride looks for a handsome face when selecting a groom, the bride’s mother looks for wealth and father looks for education, knowledge. Their kins expect a good clan while the others expect tasty dishes in the wedding.

The Holy family seems the most favourite subject! One observer probably suffering due to family disputes is thinking grimly and finds out why Shiva drank the Halahala (a poison). His inference is indeed ingenious! 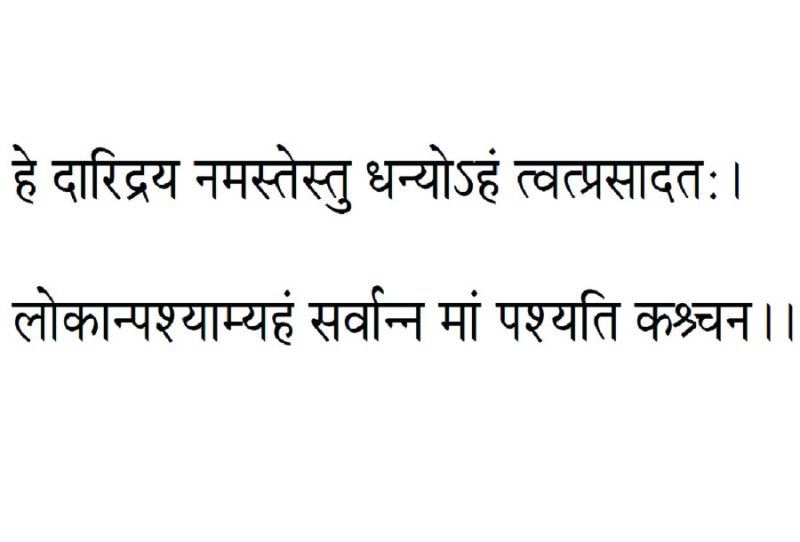 The hungry Naga (serpent on Shiva’s body) wants to eat Ganesha’s mount-rat. Skanda’s mount peacock wants (to eat) Naga and Girija’s (mount) lion also wants Naga’s head. Gauri is jealous of Ganga (on Shiva’s head), Anala (fire in the third eye) on his forehead is jealous of Chandra (on Shiva’s head). So the poet concludes that tired of these family feuds, Shiva, to end his life, consumed Halahala (venom). (Remember! Shiva consumed Halahala during the churning of the ocean to save the world.) 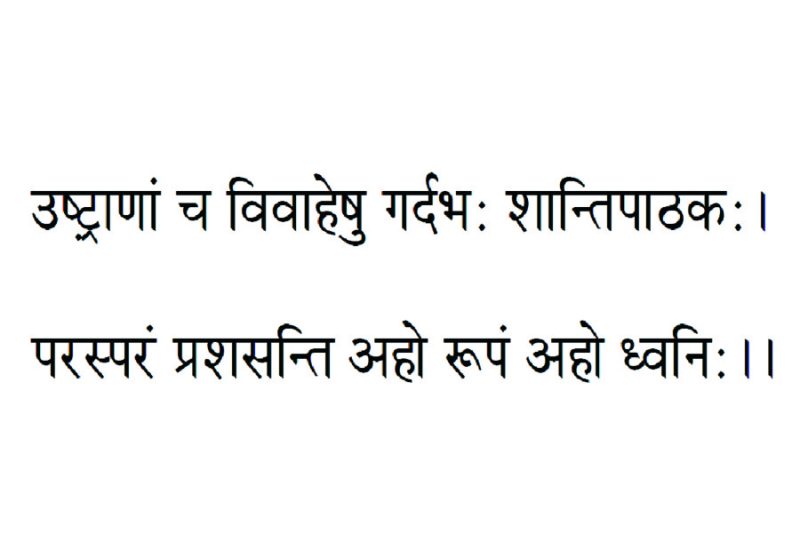 Oh, poverty! I salute thee! I am blessed to be favoured by you. I see everyone while nobody sees me. (Everyone ignores the poverty-stricken person).

Another poet, upon seeing people scratching each other’s backs, expresses his contempt: 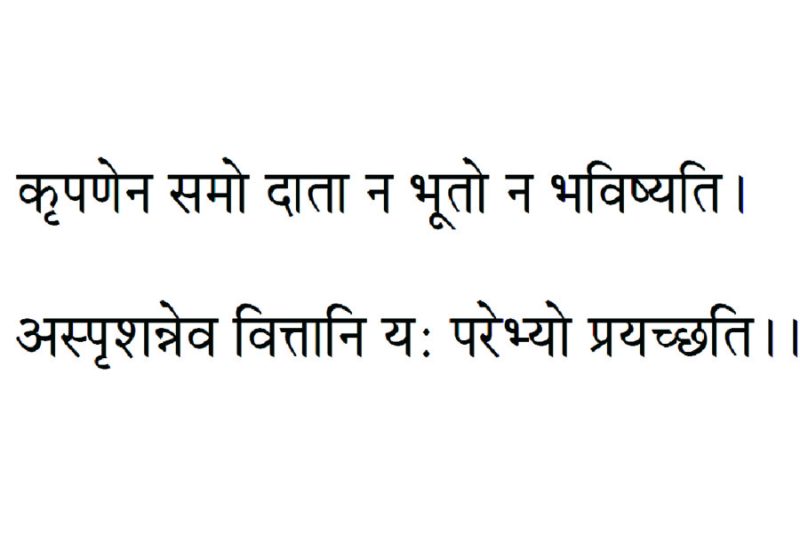 On the occasion of the wedding of the camel, the donkey is singing auspicious verses (mangalashtaka). They praise each other: What a handsome face! What a sweet voice! Poets were always seeking patronage. There are innumerable verses in Sanskrit, glorifying philanthropists and condemning misers who are not ready to part with their wealth. One poet ridicules the miser in his own style: 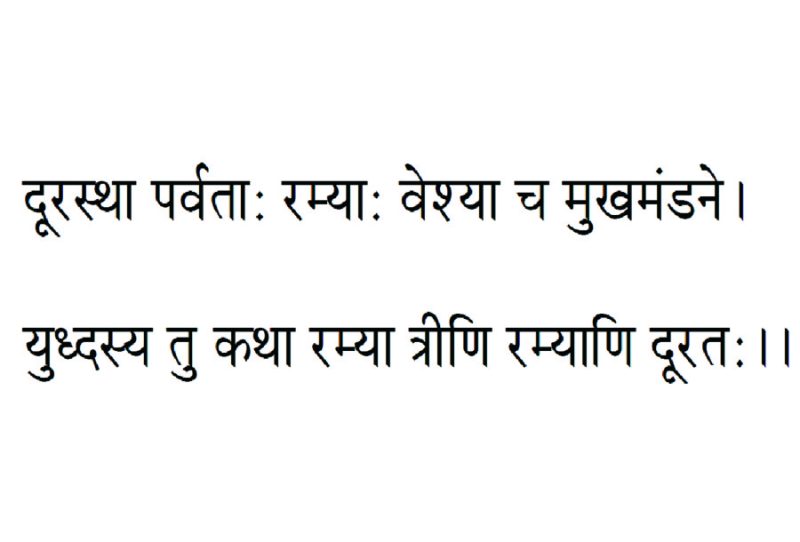 There has never been and nor will be in future a generous person equal to a miser as he gives his untouched wealth to others. (He dies without enjoying his wealth, leaving it for others).

One poet recognises limitations in his capacity to indulge and has come to a compromise with himself: 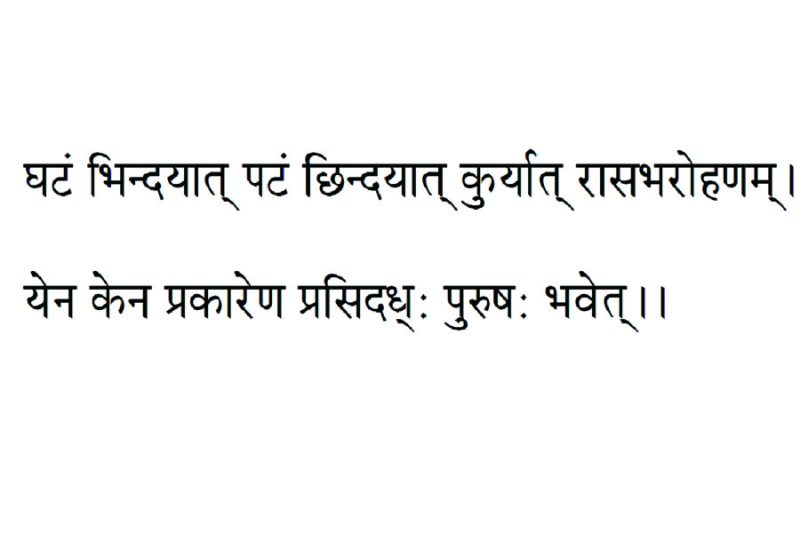 Mountains situated far away, prostitute’s face with (heavy) makeup, stories of war, these three are pleasing if viewed from far.

Today social media makes it more evident that most people are looking to be famous, often by hook or by crook. In the olden days also people were running after publicity. One poet sarcastically writes: 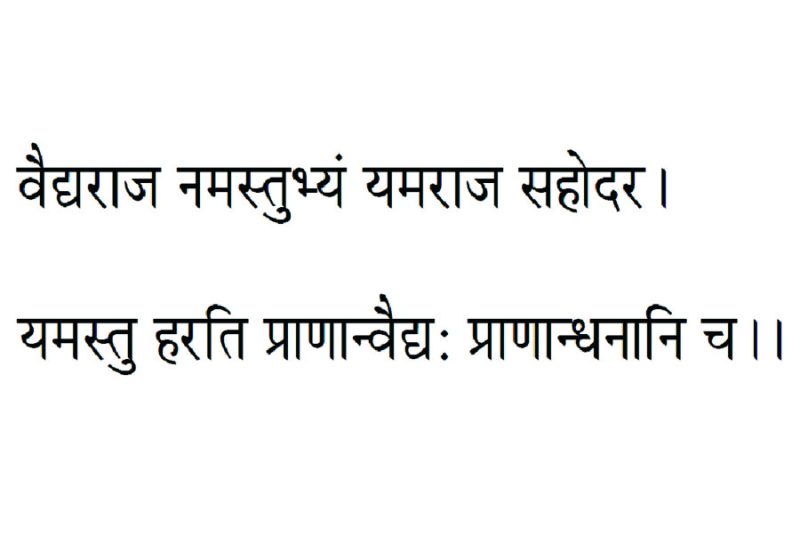 Break the pots, tear off the clothes or ride a donkey, by this or that one should accomplish publicity. He might have observed that people could do anything weird to attain cheap publicity.

Another poet seems particularly angry with doctors. He scornfully says: 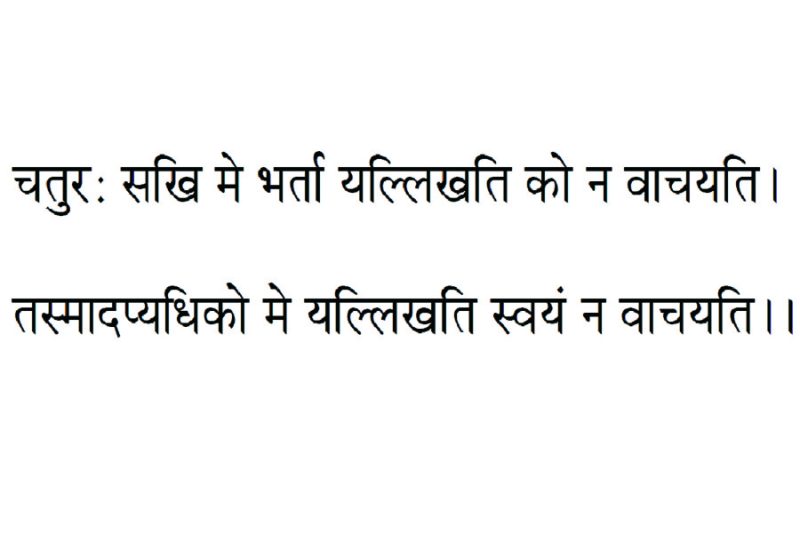 Yama takes prana (life, soul) only (but greater is the) Vaidyraja (who) takes away prana and dhana (wealth) both.

Some poets seem very particular about handwriting. One of them has produced an amusing conversation between two friends. Apparently, two ladies are boasting about their husbands’ accomplishments! 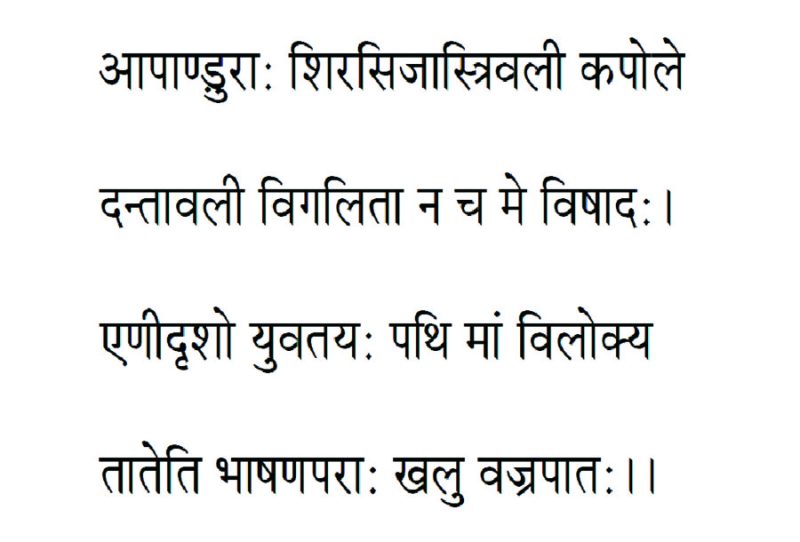 Friend, my husband (is) so smart what he writes no one can read. Mine (is) even more (smart) what (he) writes, himself doesn’t read (cannot read).

Who wants to turn old? Nobody in this world! But alas! We cannot reverse the process. Gods drink the elixir of immortality that is exclusively their right as they are gods. We mortals have to face agonies of aging. Destiny, what else? But, an aging poet has decided to express his anguish in the following words: 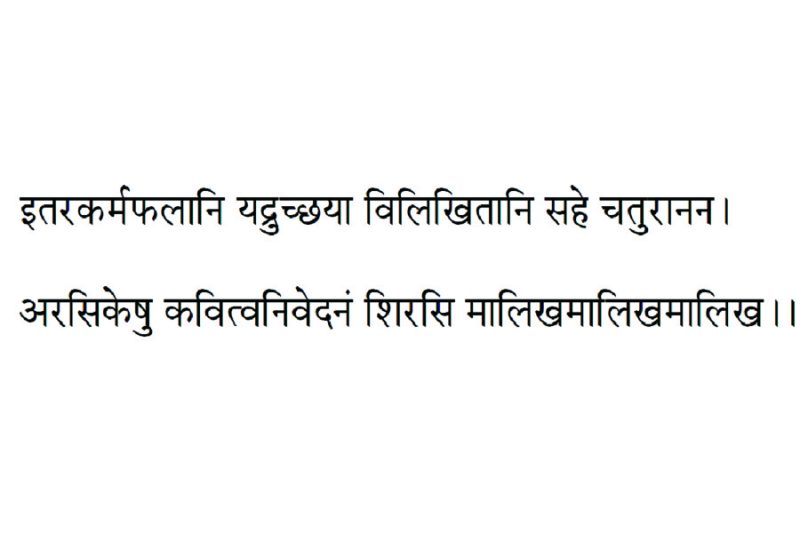 My hair is turned grey, there are wrinkles on my cheeks. Lost rows of teeth but I have no problem at all. But when doe-eyed damsels, after seeing me in the street, call me uncle that definitely makes me feel like (I am badly) hit by a thunderbolt. Very few people in the world can make other people laugh at their own expense. This green grandpa indeed has given a glimpse of his strong sense of humour.